Angelo Esposito has had a tough 4 years since being drafted by the Pittsburgh Penguins in the first round 20th overall in the 2001 draft. 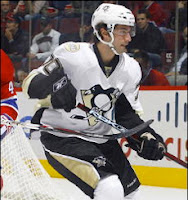 After an amazing junior career, and a 2009 Gold medal for Canada, Angelo has been plagued by knee injuries.  As a 22 year old, he has already had 3 ACL knee surgeries, and a hip labrum problem that had bothered him most of the last year.

As a first year Atlanta Thrasher, Angelo became good friends with Zach Bogosian, and his brother Aaron.  The 2 Bogosian brothers are legends at the ACC in Ottawa for their commitment to physical conditioning and testing records that both brothers hold.  It was through this relationship, that I first met Angelo last summer in Montreal.  Angelo was just recovering from one of his mid season surgeries, when I had the chance to evaluate him and develop a take away program for him.

He made some good gains last year, but Angelo realized that he needed even more of a commitment if he is to crack the Thrashers lineup.  With that he decided to move to Ottawa to train with me and completely dedicate himself to being the best he can possibly be when training camp rolls around this September.

After his initial evaluation, I found that Angelo has a number of mobility issues in his hips, thoracic spine, and shoulders.  Additionally he had weakness in his ability to stabilize his spine, and hips.  With this kind of information, I was able to create the first phase of his program, that will focus on these areas as well as strengthening his overall body.  This is important for Angelo as he needs to correct these issue before progressing to the heavier lifting and explosive work that is necessary to play NHL hockey. 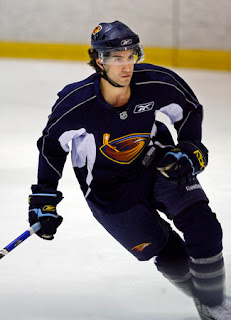 Many young hockey players are involved in 60 minutes circuit programs that focus on strength, speed, endurance and foot quickness.  Generally these types of programs are recipes for disaster, and the opposite actually happens.  The player gets slow, and does not recover well, and their strength levels are no where near necessary to play OHL hockey, let alone the NHL.   The program that Angelo is now on is geared to improve his structural integrity of his joints, spine, and teach proper technique, which will set him up for proper success.

Keep your browsers posted here as I document his progress over the summer.   I will post updates every 2-3 weeks.
Posted by Lorne Goldenberg at 10:40