Anthony Iafelice has had a busy year.  He is a 17 year old student at St. Marks High School in Ottawa, and also played football for 2 teams.  The South Gloucester Raiders Bantam Team, and for his high school team.

Anthony started the last football season in the summer with the Raiders at 180 lbs.  practicing 3-4 times per week plus games.  Then in the September he began practicing and playing with St. Marks.  He was on the field at times twice per day with a very physically demanding schedule in addition to his school work.

His father had contacted me about weight gainers etc and what he should do to try to put the weight back on, safely and progressively.  It was from here that we put the plan together to transform Anthony back in to the beast he was on the football field and more. 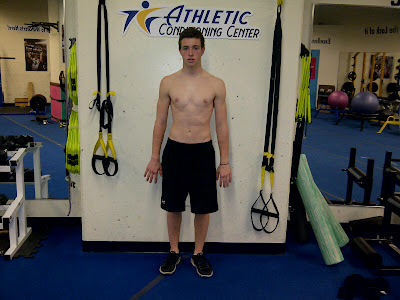 Through his assessment we found many issues with his biomechanics that would limit him in his quest of getting bigger, stronger and faster.  He had specific weaknesses in his posterior deltoid, supraspinatus, lower trapezius, and his gluteus medius.  His abdominals also showed a significant weakness in their ability to stabilize the pelvis.  In combination all of these issues would slow him down without directly addressing them via corrective exercise.  This will set the stage for his ability to lift big and heavy as we progress over the next 12 weeks. 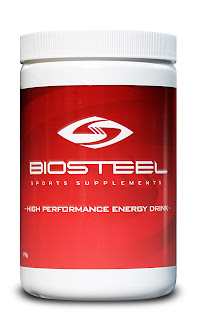 Anthony's next issue was to address his caloric intake.  Like a typical teenager, his meals where healthy, but lacked the volume and protein content necessary to build muscle.  Through the ACC we created a weight gain meal plan that included 4,500 calories a day based on a 40/30/30 macronutrient breakdown.  I did not want to go too high protein as some might suggest, as Anthony is a growing teenager and requires a good balanced diet.  We included Biosteel (www.biosteel.com) sports supplements as part of his meal plan, mostly because it is the safest product on the market, and certified to be clean.  He is taking the recovery protein formula twice per day, as well as their High Performance Sports Drink prior to and during his workouts to ensure his amino acids levels are appropriate.

AFTER 8 WORKOUTS HE HAS PUT ON 7 LBS....LOTS MORE TO COME